If you want something you must know how to ask. You are the honored Khalifa of Allah Almighty not an animal to carry loads in dunya. If you were less than that would the Angels have asked for your honor? Would shaytan have disobeyed his Lord in envy of that honor? Everything happens by Allah’s Order. In this Holy month of Ramadan “Call Me, I Answer” says the Lord. Every day the Angels remind us – Born to die, Build to ruin. You will be questioned. Say Bismi Llahi r-Rahmani r-Rahim and do not fear.

Let’s say – Bismillahi r-Rahmani r-Rahim. The one who says this wasn’t created to be an animal. Khalaqtul khalqa li ajli Fa’buduni. I created creation for Me, for Myself, says Allah Almighty. What do I want? Fa’buduni – Serve Me. Madad Ya Sahibul-Imdad, Ya Shah Mardan. Don’t sleep O people. You are not an animal. The One who created you didn’t make you His animals. Hasha (never). Addabani Rabbi fa ahsana ta’dibi. My Lord taught me good manners… The Sultan, Sultan al-Qawnayn, our Master, Sultan of both worlds, Sultan of dunya and akhira, our Master is saying that. O children of Adam, I didn’t create you as animals. Sheikh Mehmed Effendi, if I were to create them like that, angels wouldn’t stand up. Why stand up? Why would angels stand up. If we were created as animals, would angels stand up and ask for that rank to be dressed on them? No, we are not animals. Our rank is different. And that is why angels said – Ya Rabbi, “Nahnu Nusabbihu Bihamdika Wa Nuqaddisu” (2:30) We exalt and sanctify You, Ya Rabbi. Give us that rank, O our Lord. I(swt) created you and your service is different. But, what My khalifa carries is different. It isn’t a load.

Allah Dhul Jalal didn’t give us a load, hasha. Loads are for animals. Carrying loads is for animals. There cannot be any loads for man. We are given such a rank by the Lord of Glory, our Lord Jalla Jalaluhu. It isn’t a load/ burden for us. You are Subhan Ya Rabb, You are Sultan Ya Rabb. and “Fa’alun lima Yurid” You are the One who does whatever He wants. It is such a wisdom that man was not created as an animal. If we were created as animals, you could collect, load, and take as much as you want from dunya. But man was not created to carry the burden of dunya. Ya ‘ibadi fa’budni. O My servants, perform your servanthood for Me. I didn’t make you animals, I didn’t make you animals of dunya. I gave you such an honor that angels were left astonished. They said – let us carry that load, give us that rank. Allah Almighty said – No, it can’t be. What you have is suitable for you. They are My khalifa/Deputies, I don’t give them loads to carry. I don’t make My khalifa an animal that carries loads. Subhan Allah. Can the khalifa of Allah Almighty be an animal for this dirty world? Allahu Akbar They don’t understand. Allah Almighty didn’t appoint Adam, alayhi salam, to carry this world. No, that is a falsehood. This is the declaration of all the hundreds of books, Sheikh Mehmed Effendi. Allah Almighty didn’t create us to be porters of dunya.

He created us for Himself, He gave us a rank. That is why satan started a fight. Give that rank to me (satan said). If it was a load, satan wouldn’t have wanted it, but that rank has mightiness, honor, and highness. And satan was greedy for that. Or else, if satan saw it as being an animal for dunya, it wouldn’t have wanted it. It(satan) would say – I don’t want it. I don’t want to be an animal for dunya. I only need You. I only want You. You didn’t give it to me, You gave it to Adam, I am not satisfied. I want to be like Adam. An addressing came to me – you cannot (be like Adam). Likulli maqam maqal. Your rank is different, don’t object. Don’t oppose Me, I dressed you with a dress of honor suitable for you. Go ahead O Shah Mardan. Go ahead O Shah Mardan, tell us. If dunya was something honorable, satan wouldn’t have wanted it. It is because dunya is dishonorable that satan is running to it. It thought that going to dunya and being the animal of dunya would give it honor. Hasha. Hasha for the children of Adam to be animals for dunya and ask for honor.

Give us more strength Ya Rabbi, so we can understand and teach. Ya Adam – “Ya Adamu Uskun Anta Wa Zawjuka l-Jannata” (2:35) Live in paradise (you and your wife) You are honorable and precious. But you were greedy for something else. You were greedy, and you cannot find that in paradise. Go down to earth and find it there. They were dressed with dunya. Allahu Akbar, Allahu Akbar. If Habibullah, sallallahu alayhi wa sallam, didn’t come to help us, the children of Adam wouldn’t be saved. O glorious Messenger, unlimited Salat and Salam to you, you are the one, O glorious Messenger on whom the Lord of Glory sends Salat and Salam. Understand this. Go ahead O Shah Mardan. Let’s start to listen and learn, to want, and to start working. He sent him to earth and taught him with one teaching. “Wa ‘Allama ‘Adama l-Asma’a Kullaha” (2:31) Allahu akbar, Allahu akbar, (He taught Adam all the names). Allahu akbar wa lillahi l-hamd.

Go ahead O Shah Maran. Hay hay, hay hay. Allahu akbar, Allahu akbar. The Bible, Torah, and Gospels were sent, Sheikh Mehmed Effendi. They weren’t sent to make people fight each other. Hasha. But they were sent to make people ready for the service suited to the rank of their humanity. Not to fight one another, not to kill each other, not to destroy and burn. None of those are written in the Bible or Torah, Gospels or the Holy Qur’an. From where did you come up with all these wars? “Waqifuhum Innahum Mas’ulun” (37:24) Stop these bad servants. “Waqifuhum” stop them and send them away. “Innahum Mas’ulun” you will be questioned. O our Lord, we are striving to do good service and to be able to give good answers. Go ahead O Shah Mardan, your Yaran admire you. We are asking to be servants in our Lord’s Presence. Man will be stopped. An addressing will come on Resurrection Day – “Waqifuhum” stop them, “Innahum Mas’ulun” they will be questioned. Europe is mine, Asia is yours… China is for Japan, Japan belongs to China…that is not what’s important.

Go ahead O Shah Mardan, give us strength. O Sahib Maydan, give us strength. Do you want strength? Yes. Then say – Bismillahi r-Rahmani r-Rahim. Every power is inside it. Did you teach it? No you didn’t. Those people that you didn’t teach, you lowered them to the level of animals. Or else, if they said Bismillahir Rahmanir Rahim, they could destroy the world. The honor of mankind – That is the important point to teach. O our Lord, our Subhan, our Sultan. You are Subhan, You are Sultan. For the sake of Your Habib, for the sake of this holy month of Ramadan, send the worst oppressors to punish the oppressors. O Shah Mardan, we cannot address Allah directly. We are weak, but qawwi dha’fi fi ridak – walk on the way to His satisfaction and get strength. Strength is not with guns or cannons. Huuu. “Anna l-Quwata Lillahi Jami’an” (2:165) All Power belongs to Allah Almighty.

Keep the way of Adab (good manners). Addabani Rabbi, My Lord taught me good manners, fa’ahsana ta’dibi, He taught me in the most excellent fashion – not to be busy with affairs of dunya. And that is why in heavens, there are angels and everyday they call – Lidu lil mawt wabnu lil kharab- born to die, build to be destroyed. Do you remember this? Angels call from heavens – Wabnu lil kharab, you want to build, fix dunya which will be destroyed. It will be destroyed. Lidu lil mawt – You want to live but you can’t live forever. Lidu lil mawt, you must prepare for death too. Your generations will come, but all people will be taken away when the time comes. O our Lord, we are repenting. O Shah Mardan, send us guides who will keep us on your way, on the way of brave ones.

It is the holy month of Ramadan, ask and take. Ask and take. “Id’uni Astajib Lakum” (40:60) Ask. But those who go to the Sultan and ask for manure have no minds. You must know what to ask from the Lord of Glory, you must learn. What beautiful faces they have, the Yaran of the Prophet. What a beautiful face he has, Shah Mardan. Don’t be ugly. Ugliness comes from disobedience to Allah. Be beautiful. Beauty comes from worshipping Allah. Ya Rabbi, give us health and well-being. Send us Shah Mardan who will teach and keep Your way. And that is why, Ay Yaran Shah Mardan, our hearts fill with joy from your associations. Forgive us our Lord. For the sake of Your Habib, make our end a good one, give our bodies strength, dress us with mightiness, Ya Rabbi. Dress us with a dress of mightiness that is worthy of Your Presence, Ya Rabbi. Mightiness isn’t sitting in a golden chair. Mightiness isn’t by making 70 floors, 80 floors, or 100 floor buildings. Mightiness comes from heavens.

All these addressings that came are messages from heavens. Listen, understand, and find safety. If not, you will be rubbish. Tawba Ya Rabbi. Go ahead O Shah Mardan, your Yaran admire you. What beautiful sayings you have, what nice Adab you have. Strength for our bodies, Ya Rabbi. Strength for our families and children. May we be from those who carry Your Banner, Ya Rabbi. Fatiha. 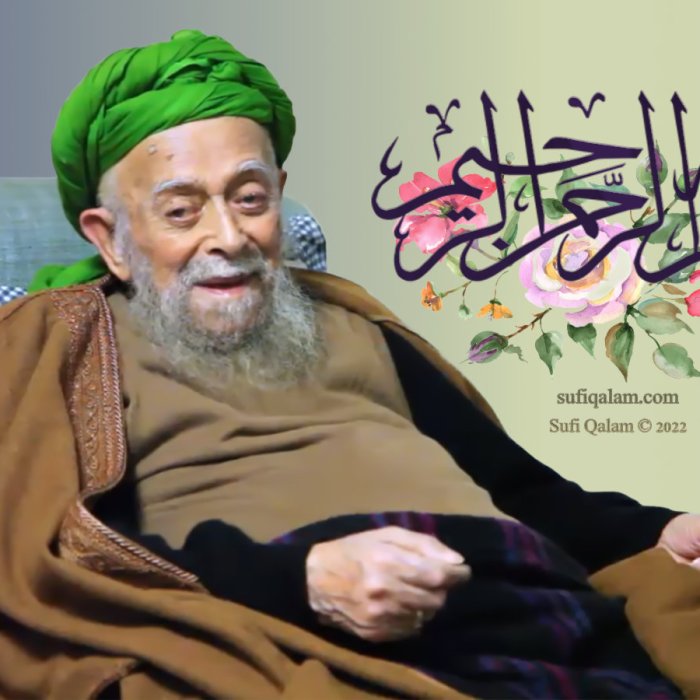 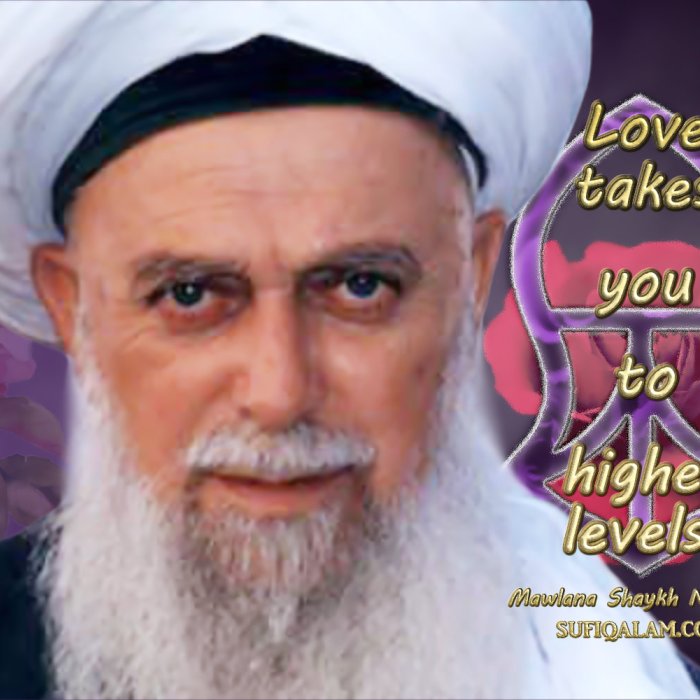 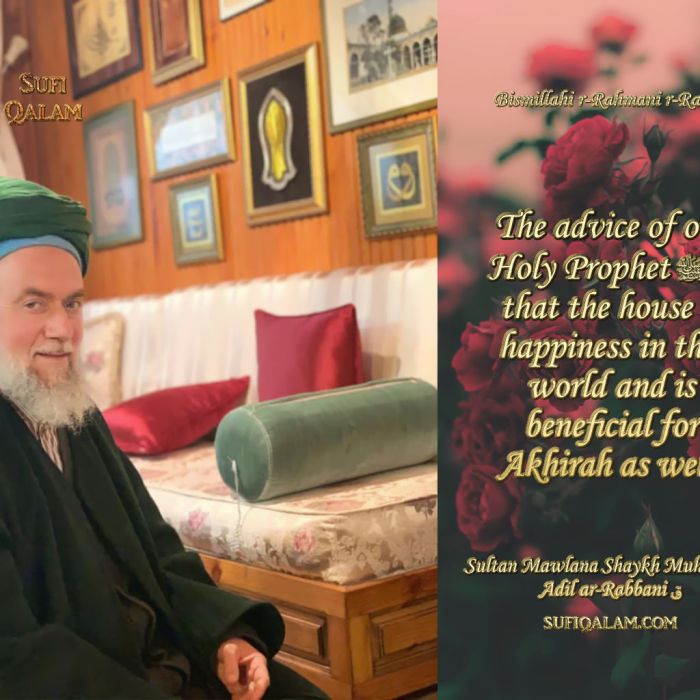 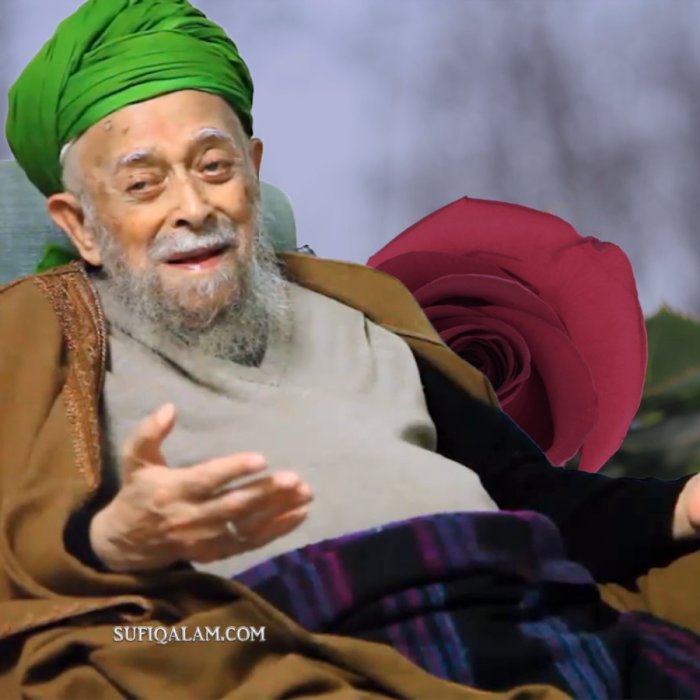 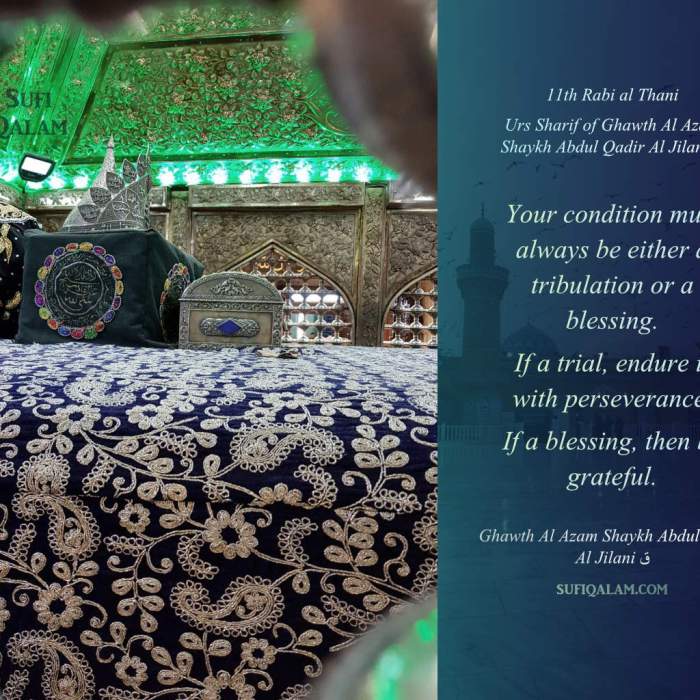 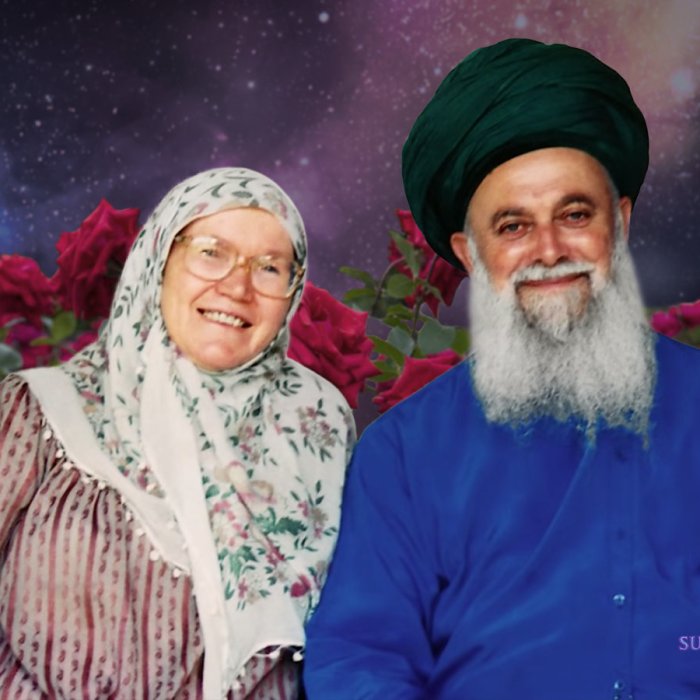 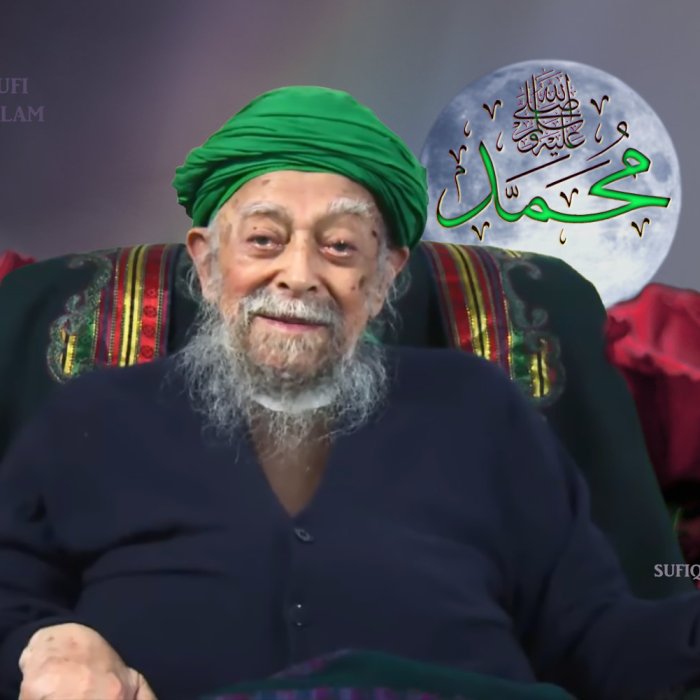 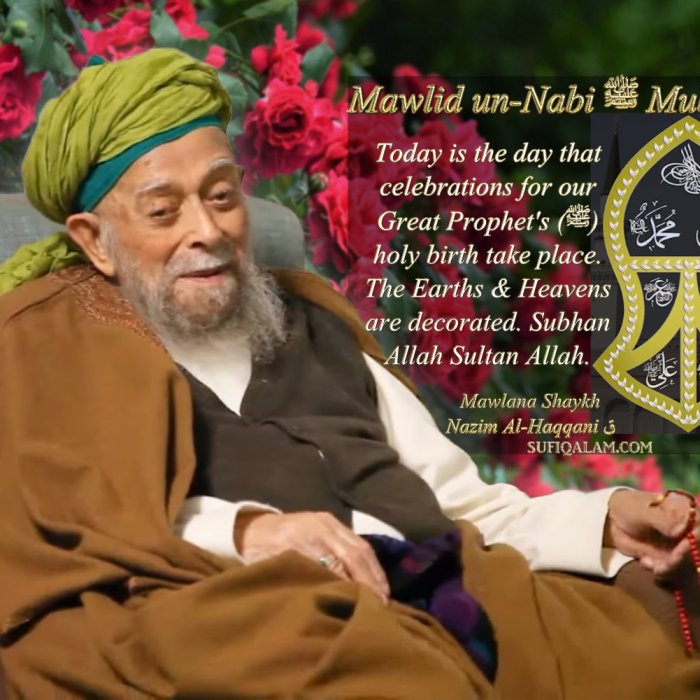 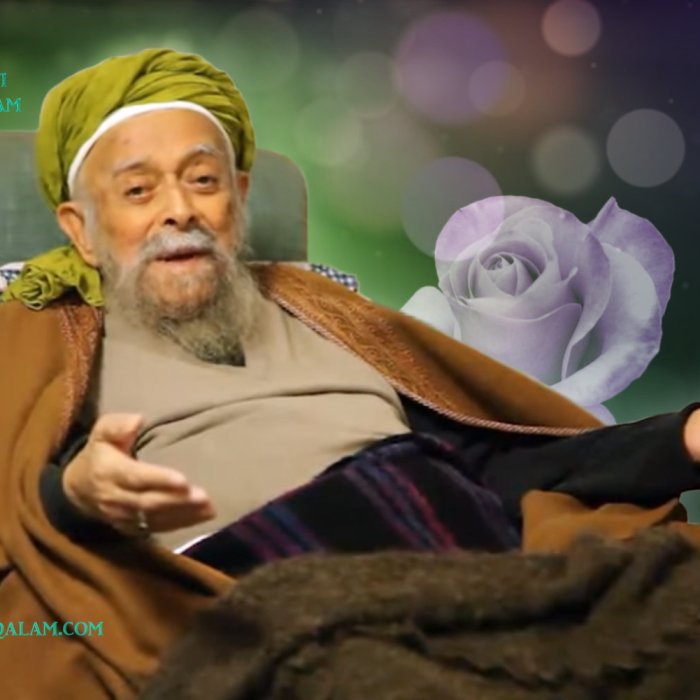 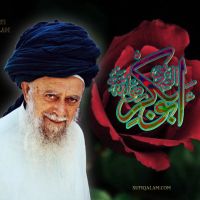 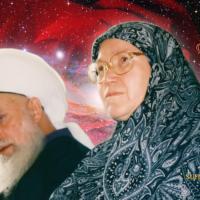 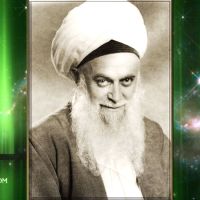 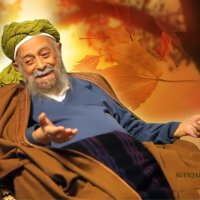 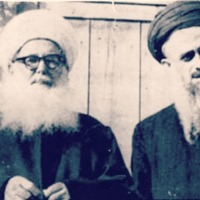 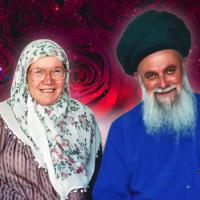 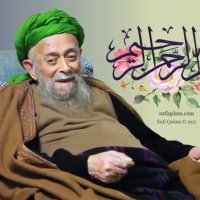 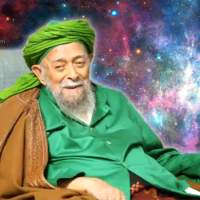